The (Harm to) Innovation Act 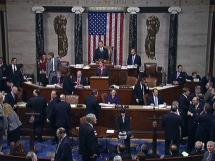 Historians, we hope, may look back on the final debate and passage of the unhelpfully named Innovation Act in the House of Representatives as the nadir of the patent-policy debate. And we apologize to readers for the fact that it happened amid a period of silence from Patent Truth. (U.S. patent US 20040193172A1 explains our absence.)

But we’re pleased we can publish this report on the bill and perspective on where the debate is going from our Washington colleague, Qualcomm Vice President for Government Affairs Laurie Self:

The House this week passed H.R. 3309 in a fire-drill fashion, but the debate over patent reform is far from over. The issue now moves to the Senate following a debate of complicated and profoundly important constitutional and economic matters that the bill's sponsors nonetheless hustled to a vote before most members had a chance to read it -- and in a way that deeply troubled a broad cross section of American innovators, large and small.

Their concern is rightly justified, and it's spreading as more and more of the constituencies responsible for invention awake to the threats posed by the bill. Small business groups, biotechnology groups, universities, medical-device manufacturers, venture capital associations, technology start-up promoters, Patent Office professionals, economic conservatives, engineering societies and the federal judiciary itself -- how often do you see judges wade into a political debate? -- all wrote to the House leadership to oppose the bill.

Yet it passed after just one hearing and the testimony of five conflicting witnesses. H.R. 3309 commanded congressional attention for a mere 43 days, and because of the Thanksgiving holiday schedule, members had five days – at best – to review the legislation after it was amended by the Judiciary Committee and went to the floor for a vote. That isn’t enough time for legislators to hear from constituents on the amended legislation or for any thoughtful consideration of its impact.

Contrast this with the 2011 America Invents Act overhaul of the patent system, which took the better part of a decade to iron out and which has only just come into force. The effects of the AIA's changes have yet to be quantified, but for the backers of the Innovation Act, that clearly didn't matter.

Politico points to the bill's bipartisan support and opposition, and perhaps more notably, confusion on both sides of the aisle amid the feverish pace on the floor before the final vote was taken. “The problem, according to most of the measure’s opponents, is that such a complex bill is being rushed through the legislative process," the news organization reports. "Detractors fear changes in the judicial system; other members are not very familiar with the complicated issues.”

Those detractors see the writing on the wall: H.R. 3309, as approved by the House today, would hurt U.S. innovation, economic growth and job creation by significantly shifting the balance of patent ownership and licensing power from invention specialists -- whose patent rights are often their only asset, negotiating leverage, and source of revenue -- to larger, better financed companies that seek to cheapen the cost of using patented technology.

America’s patent system is designed to encourage entrepreneurship by leveling the playing field for small firms, universities, and other inventors. With the passage of H.R. 3309, that historically democratic patent system is now at risk.

The bill's rationale is a refutation of the history of American innovation and intellectual property rights.

Patents have been the catalyst for innovation for more than 200 years, paving the way for nearly every fundamental invention we now take for granted. Our system has been and remains the envy of the world. Every job in one way or another produces, supplies, consumes or hinges on innovation. Countless industries benefit from intellectual property, and according to a recent study conducted by the U.S. Patent and Trademark office, the IP industries generated an astounding 40 million jobs in 2010 alone, or 27.7 percent of all jobs in our economy.

But if you listen to some proponents of the bill on Capitol Hill and the diatribes on social media, patent holders and especially those like small inventors or universities who don't manufacture are nothing but trolls -- an disingenuous narrative that offers no reliable data to back its claims and ignores the findings of Congress's own investigative arm, the General Accounting Office.

We can only hope the Senate will live up to its reputation as the more deliberative legislative body, one that will take its time, study the facts and get this issue right. Yes, abuse exists in patent litigation as it does within any legal system. But as several opponents of H.R. 3309 warned on the floor of the House, by opening the door to increased infringement a grossly imbalanced patent system would incentivize more abuse not less.