What a Difference 130 Decibels Makes 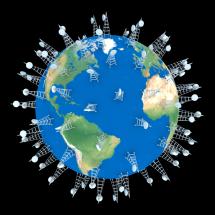 Sometimes, to remember the importance of the patent system, you’ve got to get away from the courts and the Capitol and into the lab where inventing takes place. Or at least talk to a friend who spends time there.

Patent Truth was recently hanging out with such a friend at Qualcomm and chatting about the patented work he produced that helped lead to 3G and 4G technologies, the engineering feats that make possible all those fun and essential smartphone tasks we take for granted. He is an electrical engineer named Siddharth Mohan, and we were awfully impressed when he shared the following:

“When we are talking about today’s wireless communication, when the signal leaves the base station it can undergo a loss of up to 130 decibels before it reaches your mobile phone,” Siddharth explained. “A decibel is an exponential scale (every three-decibel loss is loss of half the power). To put the 130-decibel loss in perspective that’s easy to understand, if you can consider the transmitted signal power to be roughly the size of Earth, then the received signal power is equivalent to the size of a tiny bacteria, or the size of milky way (signal transmitted) to the size of earth (received signal power). That’s a huge loss! So the technology we created must be able to decode the transmitted signal at such humongous power reductions.  Not only that, the timing also matters. If you are not able to achieve timing synchronization within roughly 100 nanoseconds (1 second has 1,000,000,000 nanoseconds), you will not be able to decode the transmitted signal. So this means a ton of engineering work is needed to make sure we can not only combat the effects of tremendous loss of power but also be able to operate at a really tiny time scale.”

Our first reaction was, wow.

Our second was to think about the amount of work, the engineering and scientific prowess, and the investment of time and money that went into solving those problems.

And here’s the patent angle.

Siddharth’s employer (which, full disclosure, is our employer too) was able to invest in this work, knowing it could recoup that investment when it patented the resulting technology and then licensed that technology as part of the global wireless standards process that lets every global smartphone maker and network operator profit from being able to connect us all. Patents make these global connections, and our friend’s work, possible.

It’s worth thinking about when we talk about patent policy.

Oh, one more thing from our friend. He said he got his scale-of-the-universe perspective from this really cool way of visualizing the universe. It’s copyrighted, not patented, but we enjoyed it so much we wanted to share.